World-class musicians are returning to North Norfolk on the 10th and 11th July 2021 as the Wolterton Ensemble performs two enchanting classical music concerts at Wolterton Hall.

The Wolterton Park Recitals give people the opportunity to view Wolterton Hall, an eighteenth-century Palladian mansion, from its south lawn whilst enjoying string music. 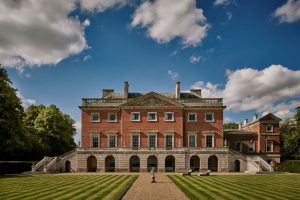 This year’s recitals celebrate our reconnection with the outside world with both concerts taking the audience on a journey through the English countryside, to Italy, through Bohemia and as far as Russia.

The recitals are under the artistic direction of Norfolk based violinist Hannah Perowne, who has led orchestras in Europe. The first concert, entitled “Nature’s Inspiration”, is themed around nature and includes the famous “Lark Ascending” by Vaughan Williams which fits so beautifully into the Norfolk landscape.

The second concert, “Russian Romance” allows the audience to travel to a different time and place, including music by Borodin and Tchaikovsky – at a time when travel may not be possible.

Tickets cost £30.00 per person and the events are being held in aid of The Norfolk Churches Trust – a charity that protects Norfolk’s many architecturally precious religious monuments.

A new stage and PA system ensures everyone gets a good view and optimum sound.

Doors open at 3pm and the captivating programme includes:

Wolterton Park has also partnered with an exciting new patisserie, Hestia Patisserie, for a delicious, Italian inspired afternoon tea – available to pre-book for £25.00 per person.

Classically trained, owner Rebecca has spent the last ten years working in Michelin restaurants including Sat Bains and Morston Hall before launching Hestia Patisserie.
With many pieces of the weekend’s music originating in Italy due to Wolterton Hall’s owners’ love of Venice, the afternoon tea includes traditional Venetian foods including tramezzini sandwiches. All ingredients are locally sourced from Norfolk, supporting other small hospitality businesses including The Garden Pantry who  grow all their own produce.

Wolterton Hall’s owners Peter Sheppard and Keith Day expect the weekend to be popular. Peter says: “We are delighted that Hannah Perowne is bringing some of the greatest string musicians from Europe  to Norfolk for these two recitals.

I am retiring as chairman of the Norfolk Churches Trust and this is the first event since lockdown that we have been able to host. So, we are looking forward to a lovely afternoon listening to beautiful music in an 18th century park setting.”

Hannah Perowne adds; “Over the past year and a half especially, both access to the countryside and the power of music have been a great consolation for many people; a way to relax, to clear the mind and find solace and inspiration.

We hope these two concerts will provide the audience with the chance to unwind with friends and family in the beautiful grounds of Wolterton Park and to be transported and transformed by the powerful stories within the music they are invited to listen to.”
Guests are encouraged to bring picnics, tables, chairs and blankets to enjoy the open-air recitals.