World class musicians performed at Wolterton Hall at the weekend, raising over £13,000 for musicians, as the prestigious venue hosted the first in its series of The Wolterton Park Recitals.

The two events, in aid of charity, sold out in three weeks and 400 guests enjoyed the recitals from the South Lawn on Friday and Saturday evening.

Following expenses, the money raised will be divided between the musicians who played live for the first time since March and Help Musicians charity, an independent UK charity supporting professional musicians.

It was Wolterton Park’s first open-air concert and The Wolterton Ensemble’s debut performance with nine internationally acclaimed musicians playing Baroque and Romantic music underneath the arches of Wolterton Hall’s grand hall. The Wolterton Ensemble is thought to be Norfolk’s only professional Ensemble with its Artistic Director Hannah Perowne based in the county. It is hoped the group will grow to include wind and brass players. 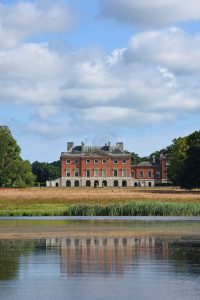 Hannah Perowne adds: “We chose to support Help Musicians charity because they have been incredibly helpful to many freelance musicians. Most people’s work dropped away completely from March and whilst some of the major orchestras honoured fees, it meant for many, all income was gone.

Younger musicians or those who had only become freelance in the last year were not eligible for the government’s bailout, so were left with no choice but to claim Universal Credit. Help Musicians stepped in immediately and gave grants and funding to as many people as possible.

There are so many musicians who have no idea when their profession will begin again, and we are all dependent on playing to full concert halls. The UK does not have the same kind of state funding for the Arts that many of our European counterparts have.”

Wolterton Park owners, Peter Sheppard and Keith Day were delighted with the events. Peter adds: “Keith and I are aware there haven’t been any music events since the Covid crisis and many friends, who are musicians, have had no work. So, when Hannah Perowne, previously Associate Leader of the Gewandhaus orchestra in Leipzig, approached us about putting on a recital with world class musicians, we were very keen to help.

The recitals were superb and we were delighted we had 200 in the audience on both evenings which, given social distancing, was our maximum capacity. Fortunately, the temperature was warm and it did not rain although it was quite windy so we had to slightly amplify the musicians so everyone could hear.

Lots of people brought picnics and we supplied wine, so there was a lovely atmosphere. We’ve been overwhelmed by letters of thanks with encouragement to repeat the concerts next year.”

Hannah continues: “We were absolutely thrilled to have the opportunity to play together again after so many months of playing to our own four walls and the reception we received at Wolterton Park was amazing. I believe the two concerts we gave at the weekend will remain close to our hearts for a very long time.”

The Wolterton Park Recitals will return in 2021. For details of future events with The Wolterton Ensemble, please visit www.WoltertonPark.co.uk