Our friends over at Candour and Osiris Technologies have launched a ‘Plug The Gap Appeal’ to provide brand new laptops to Norfolk’s marginalised young people who do not qualify for, or are out of reach of Government support through schools.

And the great news is, this fundraising campaign has already raised £16,500 in its first two weeks!

Digital creative agency Candour launched the appeal with Osiris Technologies, an IT firm that provides IT solutions for charities and schools, to help hundreds of additional young people who are falling through the gaps of Government support and other schemes. These include 700 ’NEETs’ (not in education, employment or training, aged 16-17), those with Special Educational Needs and children excluded from school.

Charities partnering with the appeal include Norfolk Community Foundation, The Benjamin Foundation, Break, St-Eds, The Matthew Project and Coalition for Young People.

The charities have identified 120 individuals across the county in need of devices. Thanks to the generosity of Norfolk businesses and individuals, 50 laptops have already been purchased. 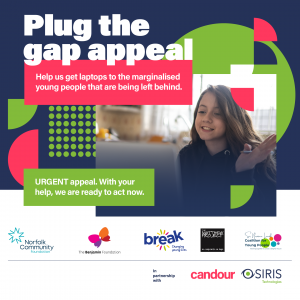 John Skinner, creative director of Candour says; “We are delighted with the response so far that will help the big gap in young people needing laptops. Whilst COVID-19 has highlighted an ongoing inequality in accessing technology, this is a long-term campaign because the need to access online resources won’t disappear after COVID-19. Access to digital technology is a fundamental part of education now.”

Phillip Roffe, managing director of Osiris Technologies adds; “When John approached me about an idea for this campaign, I never would have envisaged that three weeks later we would have laptops in the hands to those most in need.”

If you would like to donate to this fantastic campaign, head over to the Norfolk Community Foundation website.