A local music entrepreneur who made it to the semi-finals of Richard Branson’s VOOM 2016 competition is pledging to disrupt the traditional record label model by discovering and developing musicians through video content.

31 year old Harriet Jordan-Wrench from Hackney, beat thousands of entrants to make it through to the final 40 of the Virgin Media Business VOOM competition. And thanks to this platform and support from Good Story charity, is now looking to take her business to the next stage of growth. 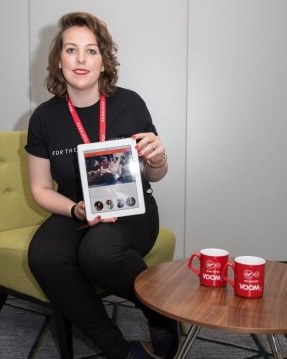 After identifying the music industry is making it harder for artists to earn money, Harriet aims to business will disrupt the industry by providing musicians with brand partnerships through video content and live shows.

Two years ago, Harriet approached Good Story, a Suffolk based charity that helps ambitious entrepreneurs with funding and mentoring. After receiving investment to launch a new website, Harriet launched Artist Accelerator this month – allowing artists to upload content and interact directly with fans. Artists also have the chance to win investment from brands including The Hospital Club.

The entrepreneur participated in Richard Branson’s VOOM competition earlier this month which saw her fight off thousands of people to make it to the final 40. The process included pitches, a public vote and a 29-hour Pitchathon to find Britain’s brightest business.

Harriet, who has already been approached by a number of investors during the process, saying:

“Becoming a semi-finalist has really benefited my business as it has been a great experience to work through the structure of putting a five-year business forecast together. And I’ve already been approached by investors which is fantastic and the new website has proven a hit with over 300 artists already signed up and 10,000 music fans visiting the site.”

Malcolm McAllister, Chairman of Good Story, who helps mentor Harriet, is looking forward to where Harriet’s business will take her after this exposure, adding:

“Everyone at Good Story is incredibly proud not only of Harriet, but also how we have helped her take Secret Sessions from an idea in her head to the current website.   We think big things lie ahead for Secret Sessions as Harriet is really passionate about supporting upcoming musical talent.  We are delighted that our charity could be a part of Harriet’s journey too.”